On the afternoon of Thursday, July 28, 2005, a citizen was walking her dog along an abandoned train track in a remote area of near Dufferin Avenue and Parkside Drive in the City of Brantford, when the body of a full term baby boy was discovered. An investigation was immediately launched and officers canvassed the area and DNA testing was undertaken in an effort to find the mother. Police also sought the public's assistance, stressing that the mother could be a neighbour, co-worker, or family member.
A towel used in this incident is a "Select Edition's", beige towel made by the Cambridge Company. It is 100% cotton and has a "Sea Same" label which may be a designer colour name. The towel is in good condition and was sold exclusively at Wal-Mart. It is 2' x 4' in size.
On August 3, 2005, investigators received a letter from the mother of the baby. The letter stated that she will be in touch with them in the near future; however, since that time there has been no further communication. On August 12, 2005, two excerpts from this letter were released to the public:

On August 17, 2005, Baby Parker was laid to rest. His burial arrangements and costs were donated by Beckett-Glaves Family Funeral Home. Investigators named the baby boy "Baby Parker", after Parkside Drive, a nearby street where he was found. However, they would rather see him buried with his family name.
Scientists at The Centre of Forensic Science have developed a DNA profile for "Baby Parker". This profile has established that both the mother and father of the baby can be identified.
Police need to confirm the circumstances of the recovery of the baby and the validity of the mother's story to police. It is realized that the mother must be afraid; however, investigators need to meet with her in order to conclude the investigation.
This incident remains an active police investigation. Anyone with information is urged to contact Detective Constable John Allan at (519) 756-0113, ext. 2266, or CRIME STOPPERS, at 1-800-222-TIPS. 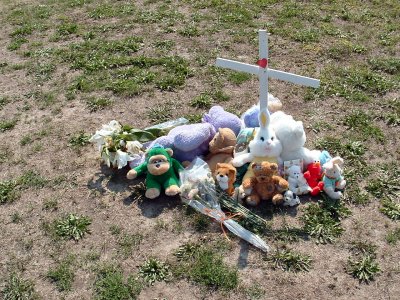