The 125th Anniversary logo was designed by Constable Jason Miller, a former member of our Service. Constable Miller designed the logo with careful consideration and research into the different elements it encompassed. The 20 maple leafs represent the number of Chiefs which are above 2 banners representing the Grand River. The daffodil is the official City flower and also represents chivalry. There is also a sword and shield representing honour and integrity and a scale of justice symbolizing fairness, honesty, and moral strength without prejudice.

A 125th Anniversary historical book, highlighting major crimes, unsolved mysteries, and interesting vignettes of our proud heritage was published in April. The book, entitled "Peacemakers and Lawbreakers" was written by Heather Ibbotson, a talented, local writer and journalist with The Brantford Expositor. Peacemakers and Lawbreakers was made possible thanks to a grant from The Ontario Trillium Foundation, submitted on our behalf by the Brant Historical Society. We extend special thanks to Stacey McKellar, Director/Curator of the Brant Museum and Archives, and Trudi Collins, of the Ontario Trillium Foundation, for their assistance. Peacemakers and Lawbreakers was distributed to all elementary and secondary schools in the City, the Branford Campus of Wilfrid Laurier University, the Brantford Public Library, and other community partners. This important, community historical book is available for sale at the Brant Museum and Archives, The Brantford Expositor, and the Brantford Police Service, at a cost of $29.99. All proceeds raised from the sale of Peacemakers and Lawbreakers will be donated to: Brantford Area Food Bank, Camp Trillium (Rainbow Lake), Children's Wish Foundation, Crime Stoppers of Brant-Brantford Inc., and the Drug Abuse Resistance Education (D.A.R.E.) Program.

On February 4, 2002, Orry Kirby, presented a $25,000 cheque,on behalf of The Ontario Trillium Foundation, to John Wyatt, President of the Brant Historical Society, and Chief Bob Peeling, for Peacemakers and Lawbreakers, a book about the 125 year history of the Brantford Police Service.

In celebration of this important milestone, we hosted a 125th Anniversary Gala, at the Brantford and District Civic Centre, on Saturday, April 27, 2002. Thirty-three of our members planned this event and by all accounts, this night was an evening to remember for the 916 guests in attendance.

Guests arriving at the Civic Centre were greeted by 2 costumed footmen. Entry into the arena was through a facade of the old Queen Street Station. The arena was transformed into an unrecognizable paradise of mini lights, greenery and flowers thanks to Frank Rejdch, local decorator/caterer, and his expert staff at Maximilian's Catering.

Guests were able to browse through a historical display area, which was definitely a highlight of the Gala. The Silent Auction was also an overwhelming success; raising $13,000 for our 5 local charities.

Peter Forbes, Q.C., was the Master of Ceremonies and local comedian, Gord Paynter entertained everyone. Music was provided by The Coppertones, a talented band, who by day are members of the Toronto Police Service.

Our appreciation is extended to all of the volunteers, including students from Mohawk College and local high schools, and Service members ( both current and retired) for making our Gala possible. We also thank the our major sponsors: 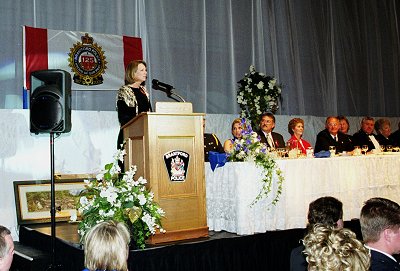 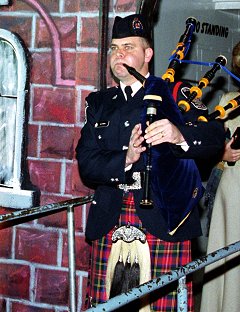 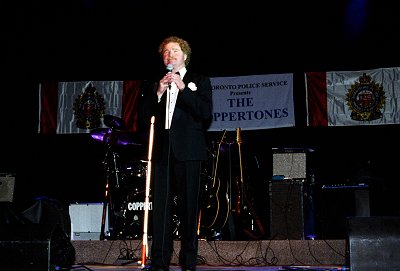