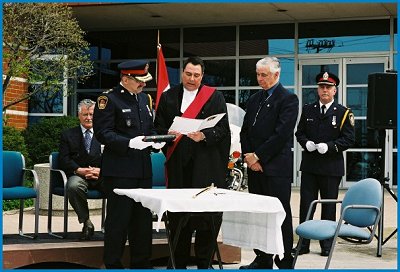 On Friday, April 30, 2004, Chief Raymond T. Fitzpatrick retired from the Brantford Police Service after over 36 years of loyal and dedicated service to the citizens of Brantford. Chief Fitzpatrick passed the ceremonial sword over to Deputy Chief Derek V. McElveny who was sworn in as our new Chief of Police by Justice Gethin Edward. 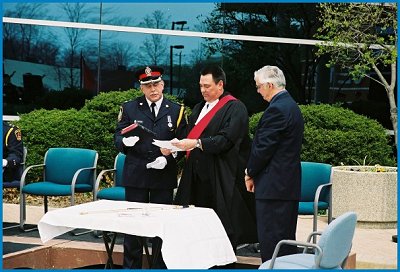 Inspector Jeff Kellner, who had served as CALEA Manager, was then sworn in as our Deputy Chief of Police. 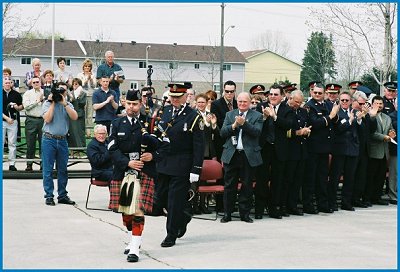 Inspector John Bates, Executive Officer to the Chief, acted as Master of Ceremonies for the event. Sergeant Michael Reid and Constable Vincent Steeves, our Service pipers, performed a piece written by Sergeant Reid especially for the event as they piped out Chief Fitzpatrick. 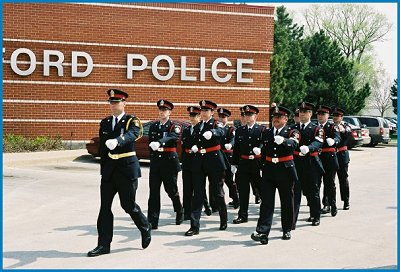 Those in attendance also enjoyed the appearance of the honour guard, headed by Staff Sergeant Scott Easto. 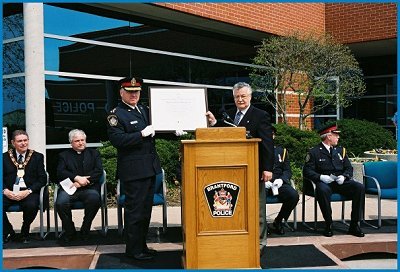 As part of the ceremonies, the Brantford Police Service was formally presented with our CALEA (Commission on Accreditation of Law Enforcement Agencies) accreditation certificate by Mr. John LaFlamme of Alberta. This accreditation, following a three-year process, recognizes compliance with the requirements of a highly regarded and broadly recognized body of law enforcement standards.